Sunday 18th October 2020 marks Anti-Slavery Day, which works to raise awareness around the issues of modern slavery, around the World. Modern Day Slavery and Human Trafficking is a prevalent problem that needs to be addressed by the Government, Local Authorities, Companies, Charities and all Individuals.

The Slavery Abolition Act of 1833 saw the abolishment of slavery within parts of the British Empire, making the purchase and/or ownership of slave’s illegal. Slavery as we know it today, takes many forms, and still remains an extremely problematic part of the modern day. 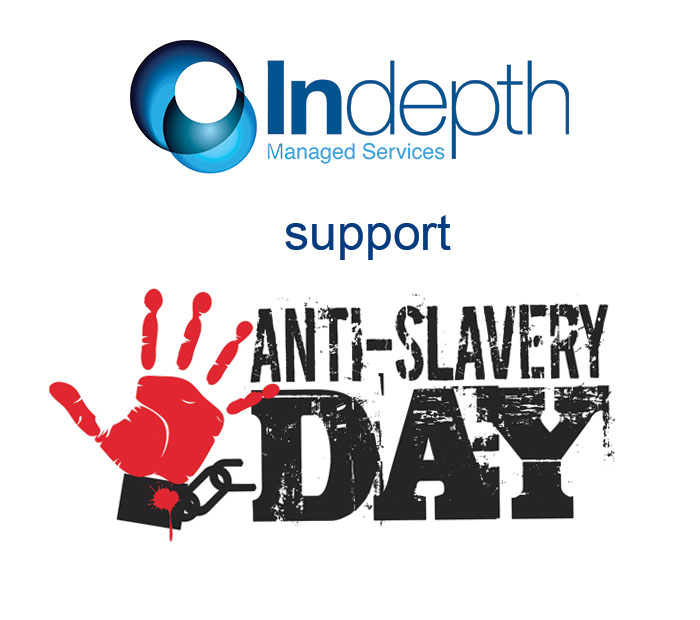 Investing in our people

As a national, commercial cleaning company, we recognise the importance of our compliance with all relevant anti-slavery laws. Our compliance helps to eradicate the issue of modern-day slavery and human trafficking within our society.

At Indepth, we abide by a stringent Anti-Slavery and Human Trafficking Statement. We adopt a behavioural value for all our business relationships, reflecting our attitude to the exploitation of individuals in any form, and more particularly the offences under the Modern Slavery Act 2015. We are committed to opposing modern slavery in all its forms and preventing it by whatever means we can.

Modern slavery is a criminal offence under the Modern Slavery Act 2015 (the “Act”). Modern slavery can occur in various forms, including servitude, forced or compulsory labour and human trafficking, all of which have in common the deprivation of a person’s liberty by another in order to exploit them for personal or commercial gain.

We are committed to ensuring there is transparency in our own business and in our approach to tackling modern slavery throughout our supply chains.

In line with Government guidance, there are particular signs that we can all look for to help identify potential exposure to Modern Day Slavery. These include the following:

Victims may not be in possession of their passports, have no access to healthcare, be in a situation of dependence, have false identity documents, be subject to threats and/or violence.

Victims may show distrust, fear or anxiety, believe that they must work against their will, be forced to commit crime in absence of available work, have limited or no social interaction with those within their workplace and/or accommodation.

Victims may be unaware of their home or work address, live in poor and substandard accommodation, have no choice as to where they live, live in degrading, unsuitable places, such as agricultural or industrial buildings.

Victims may receive little to no payment, have no access to their limited earnings, be under the perception that they are bonded by debt, be charged for services that they do not want nor need.

Victims may suffer unexplained injuries, suffer injuries that appear to be the result of the application of control measures.

The above signs are not reflective of the only prescriptive form in which Modern Day Slavery and Human Tracking can present itself. With this being said, it is key to ensure that you, and those around you, are aware of the potential dangers that Modern Day Slavery impose and therefore, why today is extremely important.